Eros is at once both the primordial force that drives creation and one of the Erotes Who met Aphrodite on the shores of Kypris after She rose from the foam of Oranos‘ castrated loins. Some mythos even describe him as the son of Aphrodite, either via Ares, Hephaestos or parthenogenesis (She was born pregnant with Him), while others describe His powers as independent of Hers, though His worship is closely linked with hers through the bond of a shared domain. In ancient art, they are frequently depicted in close company (though not always; many depictions of Eros completely independent of Aphrodite, both in paintings and statuary, survive). In Hellenistic (later period) art, especially ancient mosaics, he is often depicted as a putti (a cherub or winged infant), in contrast to Classical era statuary that depicts him as an adolescent or young man; the oldest archaic statue of Eros was said to have been in Thespiae, and was a large unwrought stone. The vast differences in art and the mythos have led some to the conclusion that there may in fact be two distinct Hellenic Gods of the same name, while others simply acknowledge one God with a lot of history and different faces. Some say that he carries two kinds of arrows: gold-tipped to bring love and lead-tipped to bring discord, though others ascribe the leaden arrows to Anteros, the Ertoe (Love God, an attendant of Eros and Aphrodite) the purveyor of Love Returned, who uses those arrows to punish those who scorn love and are cruel toward the advances of others.

The Erotes have little associated mythology and are mainly depicted in poetry and red vase paintings. Their individual cults seem non-existent; they are always worshiped alongside Aphrodite and Eros. The Erotes most commonly named are Anteros (Requited Love, avenger of unrequited love), Hedulogos (Flattery), Himeros (Sexual Desire, in some mythological traditions, including Hesiod’s Theogeny, Himeros and Eros greet Aphrodite at Her birth on the shores),Humenaios (Wedding Feasts and Hymns, often described in mythology as a son of Apollon and one of the Mousai), Pothos (Sexual Yearning, and Passion, sometimes a brother of Eros and Himeros, sometimes a son of Zephyros and Iris). Minor Goddess or Daimona (feminine spirits) associated with the Aphrodite and Eros cults includePeitho (Seduction, who, as per an Orphic fragment, parented Hygaeia with Eros), and Hedone (Pleasure, daughter of Eros with Psukhe [Psyche]). Other Theoi occasionally (but uncommonly) identified with the Erotes by ancients, scholars, and modern worshippers includeHermaphroditos (Intersexed Theos, ancient and modern protector of the Intersexed [clinical “hermaphrodites”], the Transgendered and Transsexuals, and eunuchs), Ganymedes (as a Theos of homosexual/male-male love), Adonis (vegetation and fertility Theos, originally Phoenecian but thouroughly “adopted” by the Hellenes by the time of Hesiod, often associated with the cult of Aphrodite, though an ancient Athenian cult of Adonis was maintained outside the temples, seemingly exclusively by women), Hyakinthos (Spartan Theos or Hero [depending on version or translation of His mythos], beloved of Apollon), and Narkissos (Boeotian Hero, best known as an hubristic youth who scorned potential lovers for His own reflection, in modern times is occasionally regarded as a homoerotic daimon or as one who, since death, has become “the Lover of the Unloved”).

In Orphic cosmology, Eros Protogonos is differentiated from “the son of Aphrodite” as Phanes.

Eros was primarily worshipped as a God of love and carnal desire. Some ancients differentiated his domain from that of Aphrodite by saying that Hers was to rule over the love of men for women while associating Eros with male-male warrior lovers. He is regarded as a protector of lovers and a bringer of desire. Many modern worshippers and secular �classics� enthusiasts still maintain his male-male associations; statues and other depictions of Eros as a young man or adolescent are very popular with some gay men. 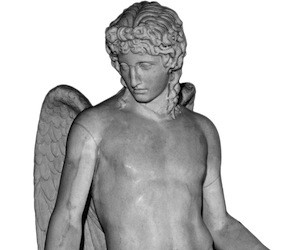